There are two kinds of transports:

Roads that lead from log yards to work site beaches,

Riverways to Nioki and Kinshasa

New roads to Matadi. A town located on a Congo river estuary which has a port allowing direct access to the Atlantic Ocean and therefore the entire world.

In order to diminish the negative impacts of loading and transporting wood, certain measures have been prescribed. 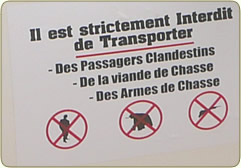 We have a truck yard to ensure that wood is extracted from the forest to the beaches and 14 logging trucks and 10 beds for the Kinshasa/Matadi connection.

We make a distinction between two categories of logs:

- Floatable wood which can be transported over rivers and waterways in the form of a raft. Logs are placed end to end, in several lines running parallel to the flow of water. Rafts are assembled using wooden beams placed transversally and using cables and clamps. The volume of these rafts can vary from 200 to nearly 2,000 m3 depending on the power of the towboat and the navigability of the river (water levels differ between the rainy season and the dry season). 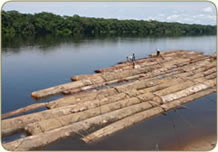 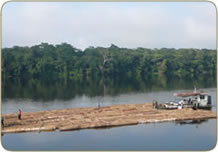 Of course, in order to open up isolated regions, we agree to carry people or goods aboard our pontoons free of charge, but one of the biggest problems we face is the “hijacking” of these pontoons by unauthorized people. This has two major consequences:

Discussions are underway with local populations and supervisory administrations in order to avoid these dangerous overloads.