The Nioki site includes a sawmill with three saw lines, a peeling unit with three lines, and two plywood manufacturing chains, as well as a slicing line.

This site is located in the Bandundu province, bordering the Mfimi river and at the edge of the equatorial forest. It is located about 500 km from the capital, Kinshasa.

Logs are supplied over the river, allowing for all the woods from Bandundu forest concessions to arrive there. Logs arrive by pontoons or rafts. For one of the concessions, 26/03 Mpolé, located northwest of Nioki, logs are transported by truck

Logs are sorted based on their destination. They can:

Sawmill: The main specie worked in Nioki is Wenge, on demand. Other species are also sawed for export, but in smaller quantities, 42% of the production is sold in the local market.

The equipment is composed of ribbon saws, edgers, and circular saws.

Sawings and plywood are sent to Kinshasa via pontoon over the river Mfimi, then follow the Kasaï river until its confluence with the Congo river. They are unloaded in Kinshasa using cranes, stored for controlling, distributed by orders, then placed in containers to be sent via railway or truck to the Matadi port.

Plywood factory: different species are peeled and used for manufacturing plywood, which is entirely sold on the local and regional market. All production is made to order.

In Kinshasa, the industrial site has direct access to the river, and includes a sawmill with two sawing lines and a peeling unit with two production lines as well as a plywood fabrication unit. 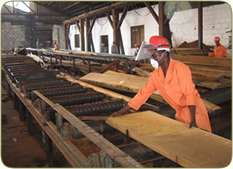 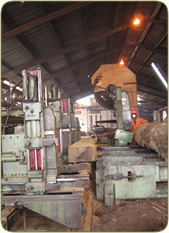 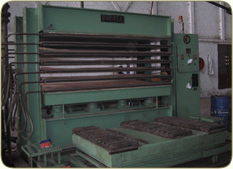 These units are currently supplied by sites located in Bandundu, the Equator, and the Eastern Province along the Congo river. In fact, convoys made up of barges, pontoons, or rafts are sent from these sites located upstream to the Kinshasa’s port, where the logs to be exported are unloaded by crane, then sorted on site before being sent to Matadi by railway or truck. Wood intended Kinshasa’s factory is received directly at the company’s beach, then removed from the water using a construction crane and a gantry.